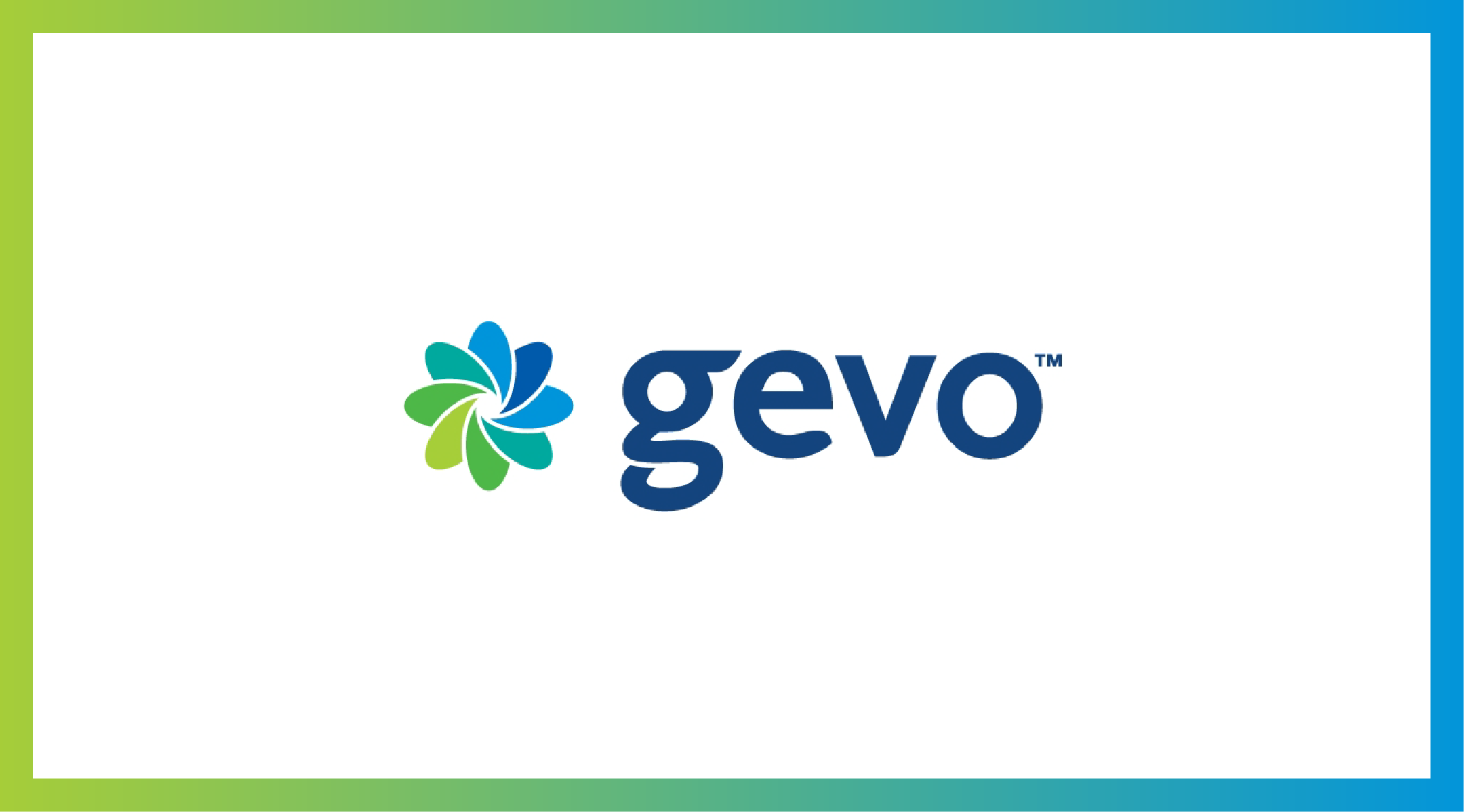 New Bioeconomy Coalition of Minnesota member, Gevo Inc., has a bold vision for producing renewable biofuels with a zero-carbon footprint that can be used in today’s engines, from cars to airplanes. The company, whose Luverne, Minnesota, ethanol plant is part of this vision, is making steady progress by increasing renewable power in its operations, securing technology offtake agreements, and obtaining certifications of its sustainability practices.

Gevo’s challenge in achieving their vision is to drive down the carbon intensity of their renewable biofuel while also developing the market to expand its use. The company has been working on expansion plans and securing long-term offtake agreements critical to commercializing new technology.

A new member of the Bioeconomy Coalition of Minnesota, Gevo Inc. is not new to the state. A decade ago, the isobutanol developer purchased a 22 million gallon a year ethanol plant in Luverne and began the process of scaling up its novel isobutanol technology. Today, one fermenter is dedicated to isobutanol, which produces up to 1.5 million gallons a year. Gevo ships most of this isobutanol to a second facility in Texas to be synthesized into jet fuel and isooctane. Three fermenters have continued to produce ethanol when margins are favorable.

There are major challenges in commercializing a new advanced biofuel: simultaneously developing a robust technology while building a market for a new fuel. This fall, Gevo announced its largest offtake agreement with Trafigura Trading LLC, an independent commodity trading company with $171 billion in revenues. Under the contract, Trafigura is expected to receive 25 million gallons annually of renewable hydrocarbons, the majority being low-carbon premium gasoline and a smaller portion as sustainable aviation fuel.

Added to previous offtake agreements, CEO Pat Gruber says Gevo has now reached over $1.5 billion in long-term contracts. “We have contracts for just shy of 50 million gallons a year. It’s an exciting time, and we have work to do.”

First up is expanding isobutanol capacity at Luverne, where the permitting step is complete. The company is also considering the southwestern Minnesota community as the location for its planned commercial-scale hydrocarbon plant.

Similar to ethanol, isobutanol production is a fermentation process, using a modified yeast that produces the four-carbon (C4) alcohol isobutanol, as opposed to ethanol’s two-carbon molecule. While isobutanol can be blended into fuel, Gevo takes it through additional steps to produce “drop-in” or “fungible” isooctane or jet fuel, which Gruber stresses are chemically identical fuel replacements to petroleum-based equivalents. The difference is that the renewable hydrocarbons are synthesized from shorter, bio-based carbon molecules instead of being refined from crude oil.

At the Silsbee, Texas, plant, the isobutanol produced in Luverne is synthesized into hydrocarbons using standard catalytic chemistry. Through dehydration, isobutanol is turned into isobutylene, a C4 building block, in a process stripping away the oxygen as water. Oligomerization turns the isobutylene into C8 and C12 olefins. The olefins have only one double bond and are readily hydrogenated to hydrocarbons. The resulting hydrocarbons are distilled to sustainable aviation fuel and isooctane products.

“[Isobutanol] is the 4-carbon building block, we connect two of them to make isooctane, three of them connected together is jet fuel using standard catalytic chemistry steps,” Gruber says. Connecting more chains produces a drop-in diesel fuel, he adds.

While Gevo has produced and sold modest volumes of its renewable fuels into several markets, the company has a long-term vision of achieving a zero-carbon footprint.

“We’ve been selling our isooctane into Europe for the F1 [Formula 1] racing circuit,” Gruber says. “We’re the base of the gasoline and they throw in all the other stuff they want.”

Gasoline offers a much larger market, of course. Eyeing growing low-carbon fuel markets in California and Europe, Gevo is focused on driving down its carbon intensity while documenting its sustainability.

Gevo has yet to file for a pathway under the California Low Carbon Fuel Standard, but Gruber says the company is targeting a carbon intensity score of 40 grams of CO2-equivalent per megajoule (gCO2e/MJ) in its offtake agreements. “We’re promising 40 [gCO2e/MJ], but we envision reaching zero.”

This past year, two wind turbines at the Luverne plant began generating 5 MW of power—more than enough to power the plant. Renewable natural gas is up next. Project development is well underway, with northern Iowa dairy farms close to Luverne signed up and an anaerobic digestion technology selected. The company is down to final engineering and capital arrangements, Gruber says.

Sustainability certification takes a comprehensive look at feedstock production. Gevo verified that the field corn used at its Luverne facility is being grown in a manner that is socially, environmentally, and ethically responsible, using good agricultural practices to protect soil, water, and air. Certifiers also verify safe working conditions; compliance with human, labor, and land rights; compliance with laws and international treaties; and good management practices and continuous improvement. Also, the Roundtable for Sustainable Biofuels certification includes validation that carbon is being sequestered in the soil.

Recognizing the growing need to track sustainability in agricultural operations, Gevo launched a new company this past year called Verity Tracking, working in partnership with Germany-based Blocksize Capital to establish a blockchain technology.

“For years, we have been tracking the sustainability of the farms, and their farming practices, that supply products to our facilities, and we need to continue to do so as we expand,” Gruber said in the November 2019 news release announcing the project. “We also track the amount and type of energy used in the production of our products. An end user who buys fuel should be able to simply access the data and know where those gallons originated and what the sustainability profile looks like.”

The goal is to sort out what the end market values, assign the correct value to it, and then set up market mechanisms to share value upstream in the value chain. “We want to create a system that rewards the value chain for improving its sustainability,” Gruber says. “Done right, we should be able to bring some of that value back to the farmer, creating rewards for managing sustainability in agriculture.”

A vision for zero-carbon fuel

Gevo’s progress in the past year has been substantial: sustainability certifications secured, decarbonization through wind and biogas projects, a string of offtake agreements, and technology development agreements in countries such as India and Australia. Gevo’s biggest challenge ahead is to raise the capital to expand its isobutanol and hydrocarbon capacities.

“We’re finally at a point where we’re able to secure large customer offtake agreements,” Gruber says. “We all acknowledge low carbon is going to be valued in the future. The Low Carbon Fuel Standard in California drives things; and Europe puts a value on carbon that drives things.”

Gruber stresses that renewable isooctane is a direct replacement for today’s premium gasoline. “Doing mainstream gasoline and replacing gallons of gasoline captures people’s attention, especially if we can get to a zero footprint. We’re talking about replacing whole gallons with zero emissions. And you don’t have to replace engines. [Renewable isooctane] works in all cars of all ages, in all infrastructure. That’s the vision. That’s what we’re shooting for.”